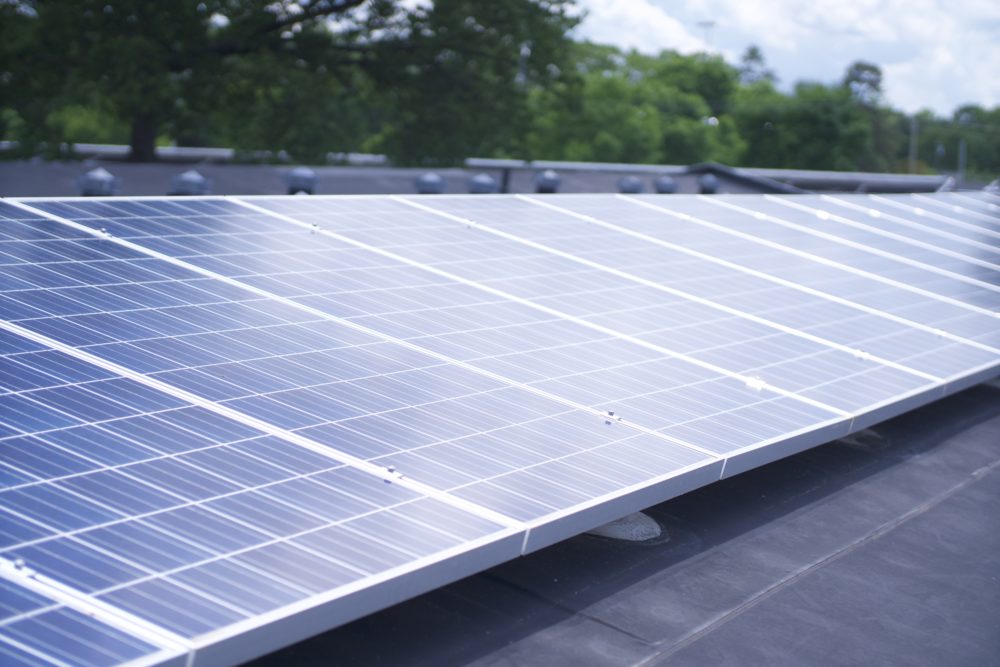 East Hampton Town’s First Solar Installation With Battery Storage System Will Generate Renewable Energy, Store Excess Power for Use or Sale During Periods of Peak Energy Demand Town collaborates with New York Power Authority to install rooftop system on Parks Department building East Hampton Town’s first solar-plus-battery storage system is being installed on the roof of the Parks Department building at the Town Hall campus at 159 Pantigo Road in East Hampton. The 75-kilowatt solar PV (photovoltaic) system will generate clean, renewable power and charge a 137 kilowatt-hour battery that will allow the Town to sell excess power to the grid when demand and prices are at their peak.

The Town, in collaboration with the New York Power Authority (NYPA), selected New York-based Solar Liberty and its financing partner on the project, Inclusive Prosperity Capital, through a competitive process to develop the solar-plus-battery storage system.

NYPA recommended the system’s installation as part of East Hampton’s ongoing efforts to move toward a 100 percent renewable energy goal.

The project also supports New York State’s aggressive solar and energy storage targets to fight climate change, which include the state generating 70 percent of its electricity from renewable sources by 2030.

Other East Hampton Town buildings were also considered for solar and energy storage, but it was determined that the Parks Department was the best candidate for an immediate installation.

This will be the first solar-plus-battery storage system installed at a town facility. Solar panels are already producing power at the Montauk police precinct and at the Lamb building shared by the East Hampton Office of Housing and Community Development and Town Trustees in Amagansett.

“Not only will this project reduce carbon emissions and make the Town Hall campus more resilient, it is also estimated to save taxpayers at least $10,000 a year between bill credits and reduced electrical costs,” said East Hampton Town Supervisor Peter Van Scoyoc.

The solar PV system will be financed through a 20-year Power Purchase Agreement (PPA) with Inclusive Prosperity Capital, with no upfront costs to the town. A PPA also enables the Town to benefit from cost offsets provided by tax credits. The battery was added at no cost to the Town through support from NYPA.
“NYPA is proud to partner with the Town of East Hampton to help achieve its ambitious renewable energy goals,” said NYPA President and CEO Gil C. Quiniones. “This significant solar and storage solution illustrates the potential for energy and financial savings for public facilities and will lead the way for other municipalities.”

It’s estimated that the power produced by the solar PV system in one year avoids the amount of emissions produced by the consumption of 7,000 gallons of gasoline, burning 68,000 pounds of coal, or the annual electricity usage of 11 homes.

This project will expand the Town’s current solar portfolio, which in addition to the solar PV systems on the Lamb building and the Montauk police precinct includes the independently operated Accabonac solar farm and the Town’s Solarize East Hampton campaign, which offers discounts to residents and local businesses on solar installations.